The Papyrus Author preferences files can be found in the appropriate system folder.

There are files for the general settings within Papyrus Author called “Papyrus.ini” (Win) and “Papyrus Preferences” (Mac).

When you first install Papyrus Author, it will take the preferences file from the “Modules” folder and copy it to the file path used by your system.

The path for the preferences file in Windows can often be in a hard-to-find sub-folder. An easy way of finding the file is to enter “%appdata%” in the top file path display of your Windows Explorer dialog.

The file path for the preferences on a Mac is usually: (User Home Index)/Library/Preferences/

Store all settings in Papyrus folder” under “Preferences” → “User Interface” → “Miscellaneous” the files will be stored in your Papyrus Author folder rather than your system folder.

These files can be deleted without causing any major problems with Papyrus Author. If they are missing, new files will simply be generated using the default settings.

Please be aware that this can only be done when you have write permission for the area.

Importing and Exporting the Papyrus Author Preferences and Settings

Export/Import settings in the Miscellaneous settings

If you would like to “save” your settings before an update, you can export and import them into the newly updated version of Papyrus Author.

Under “Preferences” → “User Interface” → “Miscellaneous” you can open the dialog by clicking on the “Export/Import…” button. Now you can select individual setting categories to save in a “Name.papsettings” file and import them after you have finished the update. 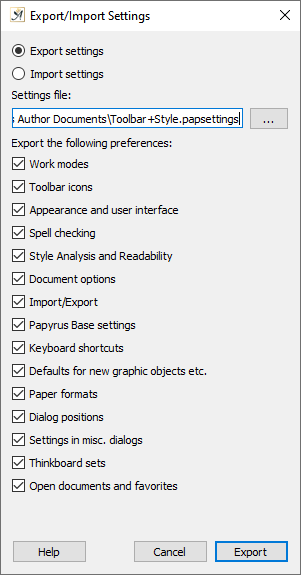 Export/Import settings with a list for elements to export/import

The “papsettings” file is almost identical in format to the settings file “Papyrus.ini” (Win) and “Papyrus Preferences” (Mac).

In this dialog it’s also possible to enter a “real” “ini” or “Preferences” file and to import its settings.

This allows you to recreate settings from older Papyrus.ini / Papyrus Preferences documents.

Importing the saved settings will not affect the documents and dialogs you currently have open, but the position of the dialogs.

Setting the Preferences File Place Yourself– For Network Admins

Those working with Papyrus Author on their own at home can skip this section. If, however, Papyrus Author is being used in a network, in which only certain areas have write permission, then the following administrative options can be useful:

The place where the Papyrus Author preferences documents are stored in Windows can be influenced with an environmental variable called “USER_INI”:

In order to create this variable for Windows you will need to open “Settings,” click on the “Extended” tab, and then click on “Environmental Variables.”

Under “User Variables” you can create a variable with the name USER_INI and the value %USERPROFILE%\Application Data\Papyrus Author\.

You can also use another file path, if you would like.

If the computer is used by more than one user and the new file path for the preferences document should apply to them all, you will need to repeat this step for each account.

A Papyrus.ini in the USER_INI folder will only be used when there is no papyrus.ini file to be found in the program folder or the folder defined by the system.

Papyrus Author stores additional application files in your system. This, in effect, means that the Papyrus Author program folder will work even without the proper write permission, just as it does for the preferences files.

First there are the user’s own dictionaries.

These are preset as the file “English_additional.tlx”, which is used to add words not contained in the standard dictionary.

Then there are other dictionaries which you can create that go beyond the “English_additional.tlx” file, for example, your own technical or scientific dictionaries.