The Thinkboard allows you to associate ideas freely and offers many features that go above and beyond a typical mind map. Create idea bubbles, notes, and characters and move them around as needed. Link them together with lines or arrows and use what you’ve created to generate new chapters. Generating chapters from notes is a smooth way to dive into the actual writing. 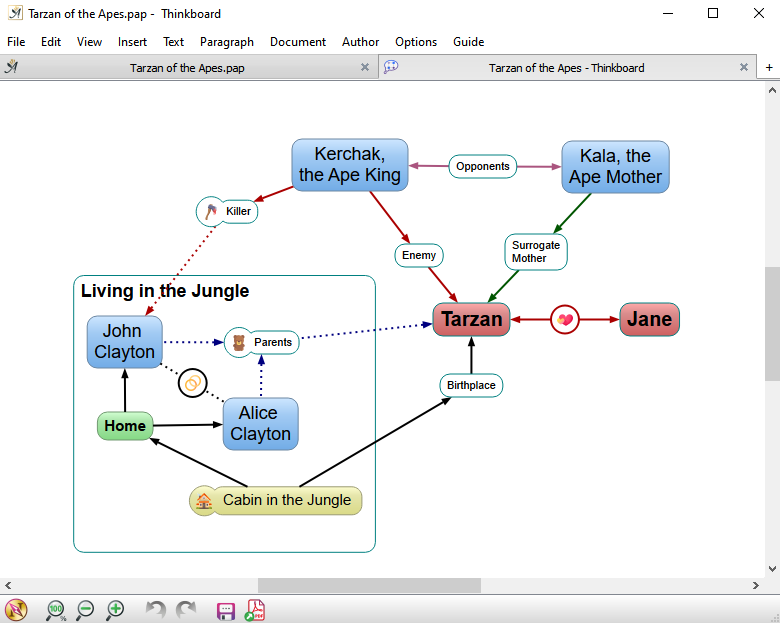 The Thinkboard lets you associate your characters, events, places and anything you find important

In the Thinkboard, your “idea boxes” (“ideas” for short) can be moved around however you choose and can be connected by various types of lines.

You can then mark all of the ideas that belong together and create an “idea group” (“group” for short) out of them. These groups can also be given a title.

The unique feature of the Thinkboard is its ability to link elements to your actual text. Anything you created in the Thinkboard can be dragged into your document. You can then later backtrack the origin of an idea (this text belongs to that area in the Thinkboard), or even create chapters and populate them with content from your ideas. It can be a lot easier to start writing when you have the basic structure and content laid out.

Furthermore, if you drag an entire idea group into the Navigator, a new chapter will be created automatically. Each idea box in the group will then become a paragraph in your new chapter.

Thus, you can use the idea-generating Thinkboard to help you directly create text.

Every text has a corresponding Thinkboard. Your Thinkboard will grow with your ideas. When you move elements of the Thinkboard–idea boxes, groups, …–close to the current edge of your Thinkboard, it will expand.

For a good overview of your Thinkboard, you can zoom in and out as you choose. This can be done either with the combination

, or with the icons

in the status bar of the Thinkboard. To view your entire Thinkboard at once, simply hold down the alt key

To do this, of course, you need to display the Navigator in the Thinkboard. Just like in the main text, you click on the compass symbol

, which is displayed on the bottom left of the window. The Navigator that opens is identical to the one in your main text.

You have the option of splitting your work space so you can see the Thinkboard and main text at the same time. This is especially useful when you want to use your Thinkboard for creating new text.

To split your work space, click on the Thinkboard Icon

, on the bottom right of the status bar in your text window.

The Thinkboard will then replace the Pinboard on the right of the window. You can move the dividing line between the Thinkboard and the main text to make some Pinboard space available again. 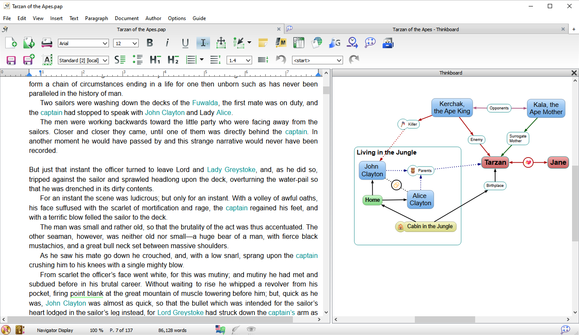 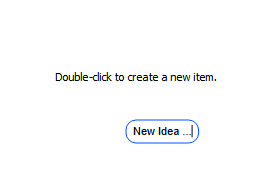 You can generate a new idea box by double-clicking anywhere in the blank space of the Thinkboard.

Once you have finished editing the text in your idea box, move it by dragging and dropping it with your mouse. To copy a box, hold down the

) when you release it.

If you want to generate a new idea box and connect it with an arrow, you can simply hold down the

) and hit any of your cursor keys (

). This will create a new idea box connected by an arrow in the direction of the cursor key.

Use the context menu

to change the look of your idea boxes.

You can change the font style and size, the text alignment, color, the shape and border of the box, and much more.

The context menu of an idea box offers many customization options

To save the design of an idea box to use it again later, open the context menu

and click on “Style” and “Create from selected item.”

By clicking on “Style” you can see the names of the styles you have created for you idea boxes. You can also assign your current box one of these styles or copy the style of a particular box.

You can adjust the size of an idea box manually

Idea boxes will stretch sideways with your text for as long as you keep writing. If you want a more compact box, you will need to manually adjust it by clicking on the side of the box and dragging it to the size you see fit. Once you let go with your mouse, the width will be set and any new text you add will also retain this shape. If you would like the box to stretch out lengthwise again, you can uncheck “Fixed Width” in the context menu.

Hyphenation settings are not included in the Thinkboard. If you get a hyphenation that you are not happy with, you can place your cursor where you would like the hyphen and use the key combination

) to create a “soft hyphen,” which means this spot will be hyphenated as you change the size of your box. 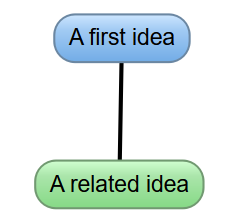 Dragging one box onto another creates a link

Idea boxes can be moved wherever you choose by dragging and dropping with your mouse.

You can create a line between two boxes by dragging one box onto the other.

you can change the look of the line–with or without an arrow, dashed or dotted, thick or colored. 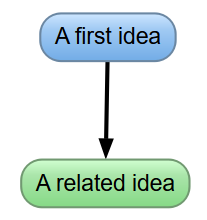 Right-clicking the line lets you customize it

The line can also be deleted here.

Two boxes can only be connected with one line.

If you hold down the shift

key, an arrow will automatically be created in the direction that you dragged and 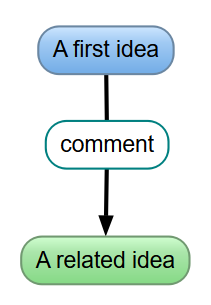 Double-clicking a line lets you create a comment box

dropped. To create an arrow in the other direction, follow the same steps using the

By double-clicking on a line you can create a new box that splits the line into two and creates a small box in between.

This is how you can connect two boxes with more than one line–by creating a new line and splitting it, using a box in between.

You have many different icons for the status of your idea boxes and lines to choose from. By clicking on “Status” in the context menu you can choose from the icons and assign them to your boxes, lines, and groups. 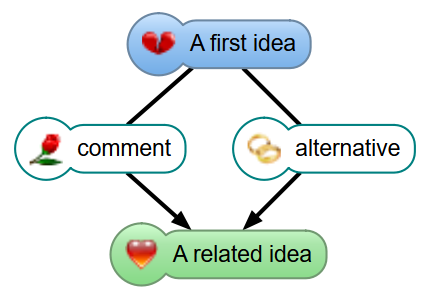 Assign different status icons to your boxes with the context menu

Organizing Your Idea Boxes–Groups and stacks 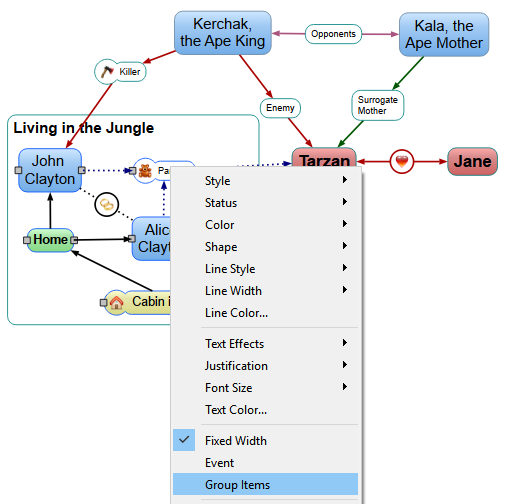 The purpose of the Thinkboard is to let your ideas condense and build on each other, so you can create real text from them and make progress on your story.

As your ideas associate with each other, it is helpful to organize them into groups. To do this, select the idea boxes that belong together by holding down

on them. Alternatively, you can also use the mouse to select an area around the boxes.

Then you can click on “Group Items” in the context menu.

Groups can also be given an individual name. 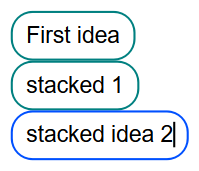 A stack of idea boxes

You can also create a stack of ideas that belong together. Click on an idea box and hit

.) Directly under that box, a new box will attach itself so you can move them together.

You can repeat this as often as you like to create lists or “stacks” of ideas.

a group or an idea into a title, scene, comment or event in the Navigator will create a link.

You can add as many links as you want, wherever you like.

Use the context menu

Under “Navigator Display” in the status bar at the bottom of the window under the Navigator, you can choose whether the Thinkboard links will be shown or not.

Drag & Drop from the Thinkboard into the Text:

Drag & Drop from the Thinkboard into the Navigator: